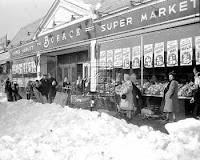 Photo via flickr.
Since I've been thinking about Queens this week, I clicked on a link in Twitter today and found myself looking at a series of photos of Kew Gardens from the 1940's. Beautiful photos accompanied by an essay written by the 8B class at PS 99. As I clicked through the photos, I came across this photo of Bohacks and shouted, involuntarily, "Bohacks!" It sounds like a curse word. I couldn't remember how I knew what Bohacks was. My mother enlightened me: it was the grocery store a block away from my grandparent's house (and the place she lived in from her middle childhood until marriage) in Rego Park. It is now a Met Foods. To this day, my mother who doesn't drive anywhere, and whose car still has less than 500 miles on it after 2 years, drives over there to shop at this store.

A little googling tells me the first Bohacks store was opened in 1887, and finally closed in the late 70's. In its heyday there was one in every town in Queens, Brooklyn and Long Island. The headquarters was in Maspeth. HC Bohack, the founder, died in 1931 when there were 740 stores and 3000 employees.

Just so you know, as soon as I saw this picture ere, I too blurted out "Bohacks!!) This is even an image of "my" Bohacks on Leffert's blvd. I still remember it well
-e-

The headquarters for Bohacks was on Bohack Sq in Maspeth right near the border of brooklyn. The streetsign for Bohacks was still up until about 15 years ago or so. I htink Bhacks was eventually bought out by Daitch.

Wow, this was the very Bohack's my mom shopped in when I was a kid! I still have a Bohack's coffee can in my kitchen from the place!

Hi, this is Richard Bohack. I'm the great-grandnephew of Bohack's founder, H.C. Bohack. My father was one of the last employees remaining before Bohack closed its doors for good in the Summer of 1977 (Son of Sam and Elvis' Death took Bohack's End out of the headlines). Many of you have your facts in order (except for the Daitch Shopwell theory ... it was actually the opposite).

The first store was on Fulton St. in Brooklyn ... it opened in 1887. H.C Bohack bought the store where he worked ... after just one year. After H.C. Bohack died in 1931, Bohack was owned by his wife, 4 nephews and 8 friends (who were H.C.'s right-hand-guys from nearly the beginning). One of those nephews was my grandfather, Paul G.A. Bohack, Sr. My Dad, Robert H.C. Bohack, Sr. and his brother, Paul G.A. Bohack, Jr. and some of their cousins were quite involved. In 1965, the "heirs" decided to retire and "Go Public" with the company's equity. Charles Bluedorn, Gulf & Western's Chariman (Gulf Oil, Paramount Pictures, etc ...) became the majority share holder. Bluedorn's regime ousted almost everone who didn't retire, incuding all Bohack family memebers ... except for my father (Robert H.C. Bohack, Sr.) My dad (who is still alive and kickin' at 78-yrs-old) ran HR ... including Personnel, Labor Relations and even Benefits (Primarily a Labor Relations Executive ... since many union workers were employed). Throughout the 1960's, Bohack perchased Daitch Shopwell, Packers and a few other supermarket businesses. From Brooklyn, Queens, Nassau and Suffolk Counties, they expanded into Manhattan and the Bronx. Since Paramount Pictures was "family", they used an Upper West Side Bohack store for the Odd Couple Movie with Jack Lemon and Walter Matthau. Bohack survived the Great Depression and other hard times in the late 1800's and early 1900's. But the recession of the 1970's was too much. Bohack tried to buy-up and built (a huge risk that could've worked) while everyone else was selling and slowing down. They quickly opened stores in Westchester and Fairfield Counties that didn't last at all ... some closed in a month! The risk didn't work. Bohack went through various stages of Bankruptcy and eventually folded. It was July 13, 1977 and I was 13-yrs-old ... I remember it like it was yesterday.

Since the company folded, it wasn't actually taken-over by any one company. Various companies bought owed-properties and stores, as well leased-stores. Bohack Square (where my parents met in 1959 when my Mom, a Maspeth native, was an intern in their offices) was sold in pieces. One note, my brother, Robert H.C. Bohack, Jr. turned 16-yrs-old in May of 1977. He became legal to work for Bohack and got a job in their Metropolitan Ave store in Forest Hills. He worked for Bohack for about 6 weeks. Many cousins and 2nd cousins on my Dad's side ... as well as relatives on my Mom's side worked for Bohack ... it was a right of passage that I never experienced.

Thanks Richard for clarifying the details of what happened to that store. It is very exciting that you found my blog and commented, I appreciate it.

You and I are about the same age. I worked at Waldbaums when I was 15, but who knows, had Bohacks survived, it might have gone another way!

Richard, it was great to see your post on the supermarket that fed our family. My Dad worked for Bohack from 1946 until they closed in 1977.

I'm sure that your Dad would remember my Dad, Nick Benizzi. He started in the stores as a produce clerk and produce manager. He was one of the first district managers in 1965 and finished his career as an executive with the company.

Everyone in our immediate and extended family and most of our friends worked at Bohack. Our lives were bound together by an organization with a unique family oriented culture. This was never more evident that when leaders of other food chains like Ira Waldbaum and Pete Piastro (President - Finast) would visit our home and talk about trying to replicate the "Bohack Culture" within their organizations.

Please give my best to your Dad. My Dad passed away in 1988 at 71.....he was 60 when the chain closed. Along with him went many great stories and history that is hard to uncover. Thanks for taking the time to post and helping fill in the blanks. Regards, Ed

I represented General Mills as a sales rep. Sold many products to Bohack. I introduced Hamburger Helper and made up the five dishes and set them up for Bohack to taste. I also gave a plaque to Bohack when our sales reached one million dollars for the first time.
We also won a contest because Bohack purchased 12 Rail cars of Gold Medal Floour that put us over the top to win the contest.
Jerry

Hello! The Bohack seen in the 1968 movie "The Odd Couple" was not on the Upper West Side. That store was on the East side of 2nd Avenue between 86th & 87th St.

Forgive me ... you may be correct. Since the setting for the Odd Couple was in north/western Manhattan, I thought Paramount Pictures chose a nearby store. My Dad was involved with the store's use for the movie. I bet he can give me the Store #. I'll be back ... thanks! - Richard Bohack ...

What a blast from the past. I worked in Bohack from 1969 to 75 and in the Forest Hills Store on Mteropoliyian Ave. Great memories, great people.

Thanks for the trip down memory lane. I remember the Bohack's on Bedford Avenue near Clarkson in Flatbush. It was one of the stores my mom frequented in the 1970s: Bohack's, Key Food and A&P. I was too young to know when the Bohack's closed, but I remember when Waldbaum's took it's place sometime in the late 1970s.

My mom shopped for a family of 7 in the early 60's and I remember the weeks grocery bill being under $30 and we ate real food. I know a cook here and I am trying to find him a recepie for Bohack's cheesecake. I have seen one comment about it and I agree, it was the lightest most delicious cheesecake I ever had. It was my Dad's favorite & you better not have eaten the last piece.

I worked part-time for Bohack's from '68 to '75 in Suffolk County. It was a shame that the company had to go chapter 11 because it was an innovative chain. I saw the company introduce the idea of the supermarket "Super Store" when they opened up the Bohack 'Village' stores in Mattituck, Garden City Park and Dix Hills. These stores had in-store bakeries; custom butcher counters; fresh fish counters; Floral sections in Produce; aisles with small appliances like irons and ironing boards, toaster ovens, blenders and such; expanded health and beauty aid aisles; limited articles of clothing for children and adults; toy aisles; stationery aisles; all the things now common in your average local supermarket.
I miss the company and the people I worked with even to this day.

I remember a Bohack supermarket on Route 25A in Rocky Point, Long Island. Shopped there with my mother during my summer vacation. Nice memory.

Richard - Please reply if you get this. I am very interested in Bohack history as my family imigrated from Germany and began in America working there. I believe my grandfather managed stores and that my father was named after HC Bohack (HC Postel).My father and his sister have both passed away and I would love to memorialize more history from that time.

I am wondering if it was one of the Borack stores up town somewhere years ago where i, get this, was carried along by water and alot of it. Carried through a long winding (think and see...as if, a skateboard park, lol) luge but wider as in 4 lanes width. I believe i came up from below thus south and proceeded, along with, cows...moving, swimming, floating upward into a level of the store. Interesting. I am not hallucinating. I was 'on the level', naturally.

@Richard,
July 13, 1977? No wonder you remember it like it was yesterday. Hard to forget that day, the night of the great New NYC Blackout of 1977.

My last trip to a bohack I found a couple of cans of I g a stuff.

Does anyone know/remember the address of Bohack in Flushing?

The odd couple was filmed in the Bohacks on 87th and 2nd ave. Store # was 2249. I was a dairy and frozen food manager there

Ed Simone, I sure do, it became the Palace diner. It was closed for a few year before the palace took over. I walked past Bohacks for 4 years going to John Bowne HS, we shopped there till it closed. We lived near it from 1954- till it closed. The Palace diner sadly closed too. Its a Chinese restaurant now. Address 60-15 Main street, corner or Horace Harding expy and main. We left Flushing after 2011. 57 years

Good articles, Have you heard of LFDS (Le_Meridian Funding Service, Email: lfdsloans@outlook.com --WhatsApp Contact:+1-9893943740--lfdsloans@lemeridianfds.com) is as USA/UK funding service they grant me loan of $95,000.00 to launch my business and I have been paying them annually for two years now and I still have 2 years left although I enjoy working with them because they are genuine Loan lender who can give you any kind of loan.