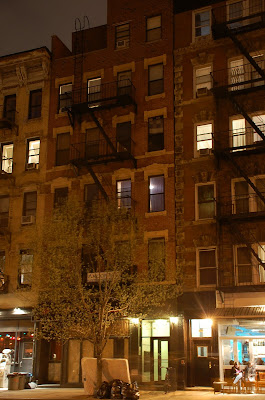 This innocuous building was built in 1900. There is nothing about it that immediately sets it apart from any other walk-up tenement of its period. According to the DOB the building was empty in 1989, an addition of another floor was put on around 2006, and they are currently renovating all the apartments inside, though it looks like tonight there were lights on in at least two apartments, and Kevin, a good looking guy, who may be a boxer, lives on the 3rd floor.. There are no rent regulated apartments in this building.

In 110 years this building has some great history:

- William Wild, the man who made the scroll saw famous, had a shop in this building during part of its history. He published several brochures the earliest one I can see is dated 1900 -- selling scroll saw designs and related materials and tools, an avocation that is also called fretwork. According to this history of fretwork, the German-originating Mr. Wild (hence his living in what was then a very German part of town) lost an eye in the Civil War where he served as a drummer boy. He established the H.L. Wild business in 1876 and made such beautiful fretwork designs that people are still looking for them today. This man was an artist. He may have died in 1929 in the Bronx. There is some indication that the business moved to 511 E11th St or 279 East 10th St. in the 1950's and then closed for good in the early 1990's when Betty Whalen, a relation who had taken over the business, died.

There is a Wisconsin-based company, Wildwood Designs, whose name might be an homage to the original William Wild. But it might be a coincidence because in Janesville there is also a Wildwood Movie Theater. According to my husband, Parker Pens are made in Janesville. 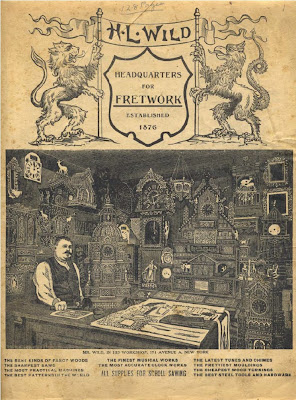 - A 12 year old tenant of 171 Ave A named Carrie Michel perished in the 1904 General Slocum disaster.

- In 1976, Hyman Lieberman was arrested for possessing 2400 pounds of mannite worth $500,000 which he was distributing to drug dealers for use in cutting heroin. Lieberman owned a store at 171 Avenue A, which he had previously owned and sold in 1966.

- In the early 1980's Bad Brains and Beastie Boys made their first recordings here at a makeshift studio and performance space owned by Jerry Williams. According to this article, he renovated the space that had formerly been a glass shop. It was an illegal nightclub that was shut down when discovered they were serving alcohol without a license. He turned it into a rehearsal space instead.

- And most recently, this space has housed a series of failed restaurants starting with Alphabet City, then El Dar, then Isis Seafood, and then a sushi restaurant. After Alphabet City I literally never noticed any of these other places.

- What's next here? We wait in anticipation for the April 19th Community Board 3 SLA Committee meeting to see what Keith Masco, a hardcore/punk producer, has in mind.
Posted by Jill at 9:40 PM

i am looking to rent an apartment on the second floor of 171 ave a. unforntunately, the bedroom is the window diagonally above the hi-fi entrance. does hi-fi get loud at night? any known noise complaints? the apartment rent is suspiciously low.

Good post. Just a few quibbles....the tapas place was actually called Alphabet Kitchen, and was great. Sorely missed. And the place has been completely vacant since the El Dar/Isis shitshow left town.....they've had that Asiya Sushi canopy for about two years, but there was never an actual sushi restaurant within. Weird.

Thanks Dave for your comment. Of course it was Alphabet Kitchen, not City, I did know that, just didn't type it correctly.

I was wondering about that sushi place and couldn't actually remember it being open, but the awning looked so definitive, I figured I've just been ignoring it as being one of a million just like it! Weird is right.

Cool piece - I live in 171 and was just hypothesizing with a friend about its history a couple days ago, so this is helpful! As for the new seafood enterprise, i spoke with Masco as he was collecting petition signatures in the area and it seems like an interesting project.

FYI petition signatures are a requirement by the Community Board of anybody applying for a liquor license.

In regards to Jon who is looking to rent an apt on the 2nd floor of 171 Ave A...I dont think there will be an issues. This will be a fresh fish restaurant with very light music playing in the background. The outside area in the back will be covered to ensure no noise will get out. Thats the word on the street.

In my opinion, everyone should support this. We need fresh fish in this part of the city!

okay, i moved in. im facing the street on the second floor. ive been there 4 nights and havent slept a wink. the buses and street noise are unbearable.

not sure what to do about this...im either going to buy thick curtains, or custom make a plexi window to wedge in the window wells. thoughts?

Welcome to the neighborhood, and it will get worse as the two new bars open on your block - the seafood bar/restaurant will be a pleasure, as well as the thing they just took down the boards today, which has been described to me as "Mexican girls gone wild bar."

Have you tried contacting your landlord? I would be curious to know what they say.

Author Koren Zailckas once lived on the 4th floor. She wrote her bestseller "Smashed" here.