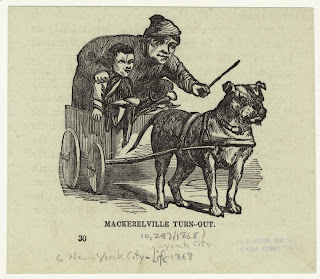 It has come to my attention, via Luc Sante's Low Life, that the area bounded between 11th and 13th Streets and 1st Avenue and Avenue C used to be known as Mackerelville, and was dominated by the Mackerelville Gang and Germans. It was considered the worst and hellish neighborhood in New York during the second half of the 19th Century, filled with cholera, filth, crime and densely packed families. There are many references to Mackerelville during the Civil War era, usually as a shorthand to describe the filthiest scum of the earth. As a key example of this, Robert Penn Warren, in a 1961 article for Life Magazine, used Mackerelville next to the words "gutter rat" to describe how young men from different walks of life came together in the Civil War battlefield.

So, in an effort to reclaim history, I hope all of my faithful readers will now start to call this area by its historical name, Mackerelville, instead of the North East Village, my former nomenclature for this area.

New York Shitty blog found a reference to a Mackerelville in Red Hook, Brooklyn. So there were TWO? I will stick to the Manhattan version. But honestly, in my research, I never came across this reference anywhere else.

A book written in 1886 called "Danger! A True History of a Great City's Wiles and Temptations" describes Mackerelville as such:

The region which most engrosses the attention of the police is that conspicuously known as "Mackerelville," which for some years past has borne rather an unsavory reputation. While there are many deserving and worthy persons dwelling in the locality,quite a different type of humanity also makes its home there. The neighborhood in question is comprised in Eleventh, Twelfth and Thirteenth streets, and First avenue, and Avenues A, B and C. It harbors a wild gang of lawbreakers, ready and willing to commit any kind of lawless act, in which the chances of escape are many and detection slight. Notwithstanding the decimation of its ranks by frequent and well-deserved trips to the penitentiary of its members, for every crime from murder down, it appears to survive, to the terror of the respectable poor living in the neighborhood and the constant dread of the police officer. It is a locality and a gang much dreaded at night, but not nearly so much now as formerly, for when a member commits a crime of any importance now he is invariably ferreted out, arrested and punished.

This same book describes the demise of Mary Maguire, a member of the Mackerelville gang:

For the love of one of these little girls, Mary Maguire, a member of the notorious Mackerelville gang met a tragic end, at the hands of a jealous rival in City Hall park, by being stabbed to death. Little Mary was only fourteen years of age. She was afterwards sent to the House of the Good Shepherd

In July 1857 the famous gang, the Dead Rabbits, were supposedly coming to Mackerelville for a riot with the 40 Thieves and Atlantic Blues to start a fight with the Metropolitans. Some were seen crowded around 13th Street and Avenue A and there was word that gang members waited with bricks and stones on the roofs. Read more about this interesting event, and the lack of police presence here. Later that week a Letter to the Editor said that there was no riot at all, and the story was a fabrication.

In December 1858 in a letter to the NY Times, a writer laments the rowdyism in the city, and sites a long and bloody fight at Tompkins Square Park where Mackerelville gangs took over the northeast corner of the park, with no police in sight. Also, a 19 year old Mackerelville thug harassed a 14 year old girl all the way from her school on 10th Street to her Avenue B home.

In July 1864 a "desperate thief," Mackerelville gang member and army deserter was re-arrested after being on the lam after breaking out of jail. He had originally been arrested for robbing a man at the corner of Third Avenue and 8th Street. His arrest was the result of an "exciting chase" along Fourth Avenue, which ended when he ran into an oyster saloon at 12th Street and Broadway.

In August 1865 Mackerelville gang members had a fight in a liquor store at 438 2nd Avenue (near 25th Street and which has had a series of failed restaurants at this location in recent years though I'm not sure what is there now) where a man was stabbed and another had his jaw broken.

In September 1865 John McNamara, a resident of East 11th Street near First Avenue, was arrested for stabbing Michael Doherty three times in the face during a drunken brawl. In that same month, two Mackerelville cart drivers named John Mulligan and John Fagan were arrested for attempted robbery while walking near 275 Avenue A. (Note: this address was near 18th Street, when Avenue A wasn't interrupted by Stuyvesant Town)

Also in September 1865 one young man exposed the ways of the Mackerelville gang, whereby they made friends with employed young men and then coerced them into robbing their employers. The details of this complicated scheme are explained here, and have to do with making wax keys and other nefarious methods of bilkery.

In a book about the Civil War, there is a reference to Mackerelville as one of 60 telegraph lines to General Butler's headquarters, "which was supposed to contain the worst population in New York."

In January 1866 a group of Mackerelville thugs went into a bar at 160 First Avenue, had some beers and refused to pay. One of the thugs, John Dugan of 188 E 11th Street was shot in the arm by the saloon keeper after a fight ensued. The saloon keeper was arrested. You can now live at Mr. Dugan's address for $1575 per month.

In an 1873 reference in the NY Times the 17th Ward is described as "what was once known as Mackerelville" in an article about a police picnic in Excelsior Park near Yonkers for the poorest children of the "overcrowded ward." It is described as densely crowded with each house having 10 to 24 families inside. The picnic gathering place was at the precinct, located at 5th Street and 1st Avenue, at which point the children will be marched to the pier and taken aboard a barge, complete with music from the Governor's Island band.

Another 1873 article wonders what would happen if an earthquake shook up Mackerelville to reveal the countless dead bodies that must be buried beneath.

In an 1881 article about missionaries, Mackerelville was described by a minister as "the nearest place to hell in New York City" and remembers first arriving and being hooted out of town, and in one case having hot water thrown on his head.

In August 1904 a gang of Mackerelville thugs lured a 19 year old Irish girl onto a boat in the East River, robbed and beat her and left her on some rocks to die. According to the report, because she was allegedly drunk at the time of the assault, they locked her up and made no attempt to find the culprits.

That's where the references seem to end, though I am sure more research would reveal a lot of crime ridden history during those years. What is missing from this record is the history of the large German population that lived here, and what they were doing at that time.
Posted by Jill at 9:33 AM

Excellent, interesting post! You've inspired me to go out and do some neighborhood digging... ;)

If you dig up any good bodies, take a photo before calling the authorities!

No bodies yet, but the line above that mentions the police precinct being at 1st Ave & 5th St got me curious and I found this photo that alludes to the station house being on that corner:

(It's the 12th photo down). Anyone know anything about that theater on the corner or when the police station opened?

Back in the Civil War era, we were in the 17th precinct (or "ward"). I wonder when it changed to the 9th.

See the General Slocum Disaster for information on what became of the German population. JK

Most of the buildings on 1st Avenue between 11th and 13th have not been rebuilt since it was Mackerelville. Check out the many four-story row houses that go back before the Civil War. First Avenue is one of the oldest areas of a neighborhood the rest of which was mostly built in the 1870's, '80's, '90's and the turn of the century.