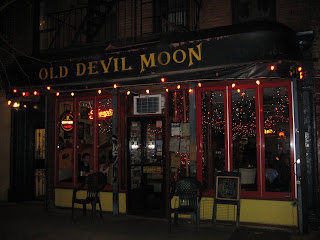 Tonight was the last night of service at the 15 year old restaurant Old Devil Moon. There was an unofficial goodbye party from the block, mostly the garden. Being mid-winter and without anything to argue about such as whose allowed to drink and when, who left the garbage behind, who is not tending their garden well enough, who doesn't help shovel, who is growing weeds etc., it was a pleasant gathering. By 7:00 they had run out of red wine, beer, beef, burgers and more. One waitress was tending the whole place, so service was slow, but nobody minded. The owners were not around.

Before this was Old Devil Moon, it was The Continental. It had the air of being a restaurant, but I tried to eat there very soon after they opened, and it became clear within minutes that they didn't actually serve food to customers. I hate when that happens, it makes me feel so naive. They were the drug kingpins of the block and very blatant about it. During the summer of 1993 (or 94?) they put tables on the sidewalk (no permit) and had a Latin band every Saturday night, opening their glass double doors wide all night long for their weekly private street party. The music stopped around 5am. They were finally shut down, and it was all happiness when Old Devil Moon arrived in their place, with their southern style food, long lines at brunch, solstice street celebrations and sexy bakery.

Hopefully the next thing that opens will be as good a neighbor as they have been. But from the vibe around the streets my guess is that it will remain vacant for a long time.

UPDATE
After writing this I saw an email from someone saying they heard it's going to be an organic restaurant. Will Jubb be back in a different guise? Or are the same owners just changing the theme? I wish I had seen that email before I went in there tonight or I would have asked more questions. I"m not a very good reporter, with the question asking thing. 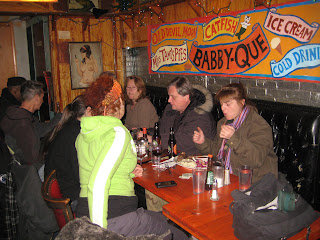 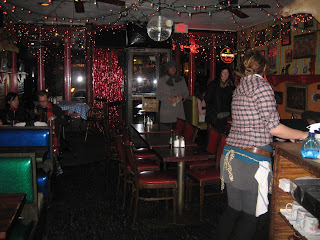 Nice post, Jill. Any reason given as to why they are closing? Higher rents? A slowdown in business?

I have lived on the block for years and I used to eat at Old Devil Moon all the time. The owners were always around in the beginning and the food was great. In recent years they weren't around so much and the food wasn't so great anymore. I wondered if it had been sold to new owners or something because it just got so bad. A lot of my neighbors stopped eating there and the place was empty every night the last few years. I don't know how they held on as long as they did. It is a shame. This was one of my favorite restaurants for years.

You are right, we haven't seen the owners in years either. I got an email from someone who said she recently had twins and they haven't been making money so they decided to close.

My husband had worked for them years and years ago, renovating previous restaurants - Exterminator Chili was one, I can't remember the others, but they had a few. I suspect they still have others. And the emailer also said they will continue the bakery, Masterbakers, running it from another location.

At least my meal there last nite was as awesome as always.

That place will be missed!

As the one who had to finally decide to close Old Devil Moon, reading all these nostalgic remembrances is sweet and sad. My thanks to everyone who loved it and ate there often. There just weren't enough of you anymore!

It wasn't a hard ass landlord who squeezed us out(they've been GREAT to us), it was just too hard to manage by myself after the partnership split up and I was too nostalgic to see that it was probably time to say good-bye a while ago.
But it was a place a lot of people loved, and I'm very proud of that. My older kids grew up there and at the park down the street, and the neighborhood was their second home. There are many great memories there, Harry and the Wahoo band that played hundreds of Thursday nights, firework collaborations in the middle of the street with Jonathan from Clockworks (now the empty Jub's), and lots of good personal times for our family. Now with two new little babies, I had to say enough is enough.
THE NEW OWNERS are a very wonderful group of guys who have roots in the east village as well. They were customers themselves and felt sad to see it close. They have a good strong concept and will be great neighbors, so give them a chance.

Masturbakers will be on hiatus till we can find a new home, so email me at masturbakers@hotmail.com if you've got any leads, maybe a bar that has
has a unused kitchen.
If there’s anything from the walls you're interested in, drop me a note as well.
There are too many people to thank, but a big hug to Sara who was running it while I was birthin' and taking care of the little ones.
Thanks, truly, for everything...
Miss Tami

Tami,
Thanks for your note. We are all sad to see you go. You have big shoes to fill and hope the next owners take good care of the place and become part of the neighborhood as you did. Good luck and thanks for the years of making 12th Street a better place.I sent your comment to a friend who has a kitchen in Brooklyn. I'm not sure if they have room for another baker, but if so, she'll contact you.
- Jill & Slim