Coffee Shops Disappearing as Fast as They Appeared

Recently I was lamenting a new coffee shop set to open on the corner of 12th St & Ave A, feeling that there were already too many, too much coffee. Well, I wasn't wrong, there were too many, because three of them have closed in the last week or two. And I realized I couldn't remember Rapture (closed) and totally forgot about Dynasty (closed).

Dynasty, on 14th and B, was an institution (for those who like dirty institutions). This was the go-to place for really cheap breakfast specials, kept in place long after breakfast specials turned into expensive brunch menus everywhere else. Apparently the mental health of the neighborhood was being destroyed (click on the photo and look at the sign.) 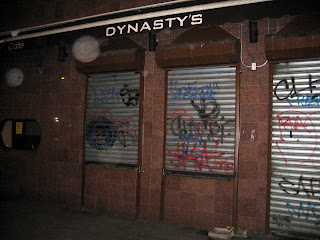 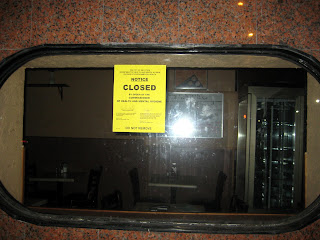 Two coffee shops on Avenue A that weren't open for very long, both closed at the same time. Rapture (which also was a book shop, sort of) is gone. And Gramstand, which was a very typical carb, coffee and couch spot is also out of our memories as quickly as it entered. 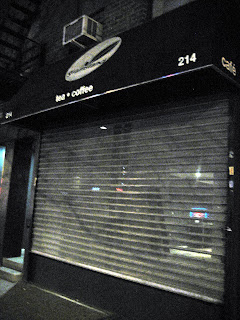 I live in the area here, and I have noticed a number of coffee shops, with the common thread of all of the ones you mentioned earlier being---they don't serve good coffee. 9th Street Espresso is by far the best coffee in the area, and I can't bring myself to go there because the people who work there are total snobs. I hope that this new place on 12 and A serves good, quality coffee. (This is me being a non-snob snob).

Also, I had a chance to talk to the owner of Gramstand, Richard, and found out why he really went out of business (it wasnt for lack of success or saturation.) He recently expanded into Equinox Gym's yoga studios, which turned out to be not a successful as Equinox must have assured him it would have been, since it basically bankrupted him. Gramstand had good teas, OK coffee, and always seemed to be crowded.

Dynasty was one of the worst restaurants I have ever eaten in. I tried their food a couple times over a many year period, and found it almost inedible, and I am far from picky. I can eat at almost any dirty looking coffee shop, as long as the food is halfway decent. They have been closed down numerous times, I think, but they always keep reopening. Personally I would love to see them close for good.

Rapture has actually been closed for months, and it was very easy to see that coming. I think their rent was $10,000 a month, and there were never that many people in there. Plus I think they opened at 10 AM, which makes absolutely no sense whatsoever for a coffee shop. But the space was nice, and the bookshop idea was good, though badly executed in my opinion.

Gramstand had a for sale sign in their window for a while, and closed with almost no notice. I heard they had a flea market/buy what you can while we run out the door sale the day they closed. Sounds like they basically got evicted, or were going to and decided to just cut their losses.

You also forgot to mention that Alt.Coffee on Avenue A between St. Mark's Place and 9th Street closed this year as well, after a huge renovation and taking on new partners. They made a go under a new name, which I forget, which was supposed to be child friendly, for all the new mothers in the neighborhood. That obviously worked out well, since they closed months later.

As for the place on 12th Street and Avenue A that was supposed to open early December, and looks more like it will now be early January, they are supposedly going for the European vibe. They owners have a dog, and they are setting up a window outside so dog owning customers don't have to leave their dogs outside to get coffee. I am pretty sure in Europe you are allowed to bring your dogs inside the coffee shops, which is a health violation here. I also think the Europeans leave their kids outside when they eat at restaurants, so maybe they have a point. I met the couple opening the coffee shop, while they were gathering signatures for the possibility of selling wine, or something like that. They mentioned something about their rent being reasonable to start, but their increases are huge each year after. So they might actually last a couple years before inflation and rent increases put them out of business, or they move to another location.

I know way too much about neighborhood coffee shops considering the fact that I never drink coffee and feel like spending that much on a drink is a mortal sin.

Thanks for the information. I don't drink coffee either, but I do like smelling it. The nice thing about these coffee places, despite there being too many of them, was that they were independently owned and decidedly not Starbucks.

What about Ciao For Now? That place has become a staple over the past few years. The coffee isn't anything to get excited about, but the food and the owners are.

Yes Ciao for Now was on my original list of local coffee shops. They moved down the block and to the north side of the street. Their coffee might not be great, but their lunches are the best value anywhere. Delicious food at reasonable prices.

Fubar Vikinghelmet here... The rule with Dynasty was: breakfast and burgers. Anything else and you're in for it. Half-decent coffee, good - really good - burgers, good chocolate shakes, eggs, etc. they'll be missed.

I've been trying to find out what's happening to Dynasty. It seems like they were just closed for health code violations, but it's been like 3 months now. I think they've been around since the '50s. I think it's a shame if they don't open back up but that's how it's looking.