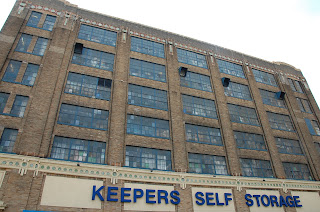 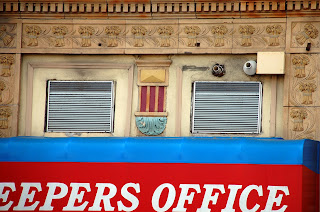 Keepers Self Storage on East 10th Street, has a screaming awning that blinds you from what is really important - the beautiful building. Despite its designation as an official landmark building due to being one of the last of its kind in this formerly industrial neighborhood, Keepers still insists on defacing the exterior with their hideous signage. But avert your eyes and behold the wheat bundles that adorn the facade.

Built in 1928, the Wheatsworth Bakery was the same company that invented Milk Bone dog biscuits (then they were called Malatoid)! While several articles credit F.H. Bennett with inventing the dog biscuit, in fact he bought the recipe from a British butcher who tossed out a bad tasting biscuit and found his dog liked it just fine.

And in one important piece of trivia, F.H. Bennett also built the Gingerbread Castle in New Jersey which is near Jenny Jump. 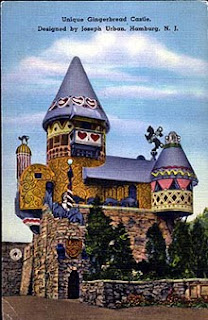 The company made all things whole wheat and sold to Nabisco in 1931. The Wheatsworth cracker you find in today's supermarket is from the very same company and used to be manufactured right here, just blocks away from where you are probably sitting.

According to the Landmarks Commission report, their first factory was located at 138 Avenue D after the company was first formed in 1907. In 1903 it was listed by the fire department as a 5 story tenement building. It was then sold in 1906 by Jacob Berlin. By 1930 it was designated an unsafe building and demolished in 1945. In 1949 the Jacob Riis Houses were built there, named for the man who documented the awful tenement living and made strides to build something better. To read memories from five of the original tenants in 1999, click here.

It is across the street from the famous shark of Avenue D. 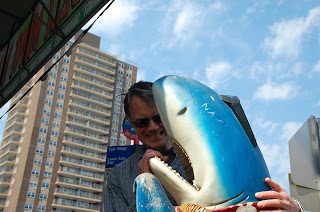 Other landmarked buildings in the East Village:

Love this history, Jill... was unaware of this building's past. And that awning is atrocious.

The gingerbread castle looks fabulous. Near Jenny Jump? A town I guess.
I never saw the shark. I guess I don't go up that way much. Can't quite make out the context of the shark with this close-up.

I have a storage space in there; set into the walls in the stairwell are amazing old tiles showing wheat fields under a cheerful sun, meadows full of trees and other nice bits of nature. The interior was jackhammered to the walls when it was made into Keepers, but the tiles and facade show how lovely it must have been originally.

Walking down Ave D the other day, I noticed the shark is gone!

I am so sad now. Does that mean I possibly have the last photos of the shark? Maybe they took it in due to the rain? Or for repairs? Or because you couldn't ride on it like all the other fiberglass animals.