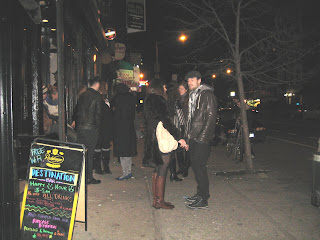 Tonight, at the Community Board 3 meeting I made the first public speech of my life, and it was not comfortable. The microphone seemed very loud, way too loud. I wished I had written it out better, but instead scrawled my thoughts on the back of the agenda 5 minutes before the meeting started and I had a little trouble reading it, following all my arrows and inserts.

Mostly what has occurred to me over the course of the last few weeks is the incredible corruption of the liquor license transfer process. I have gone from "I don't want more than a dozen bars within two blocks of my house," to "Are you fucking kidding me that a defunct business can sell their liquor license for $20,000 with the blessing of the Community Board and the State?"

The background is that at the last CB3 meeting I inquired about the policy of rubber stamping transfer licenses, which is when a new bar moves into the space of the old bar (or restaurant) and gets to their liquor license, even if they are in a frozen zone, and even if there are a dozen other bars nearby, once the formality of approval and paperwork is complete. The philosophy of most of the SLA committee members is that a business should be allowed to sell, and we shouldn't stand in their way. That is because some of the committee members are bar owners and know a golden ticket when they see one.

And thus, my speech to the full board on this subject, which is a precursor to the issue up before the board next month when the empty space that housed The Raven, last open in 2006, when it burned to the ground, is applying for a transfer license. I am sure that The Raven's owners were not happy to have lost their business, and did initially intend to re-open, but the landlord decided to tear it down and rebuild. The owners of the Raven likely got insurance, and then opened a new place in Greenpoint. I wish them no ill, they were very nice people, and ran a place that had a good fit into the neighborhood (whether or not you agree with goth night) but I don't know why they should be able to sell their liquor license when there is not only no business to sell, but it's not even the same physical building.

This month there was a transfer license on the docket to be approved, from a bar that has been shuttered for several months, and was reported by Crain's to have sold their liquor license for $20,000.

And thus my speech, which I will present for you here:

I am here to protest the SLA Committee's policy to rubber stamp transfer licenses in the case when the transfer involves a defunct business, in an area where 5 new licenses for bars have been approved in the last few years, licenses in places that used to be a laundromat, Italian deli, bodega, parking lot and restaurant, and in an area where there are now 11 bars within 2 blocks.

The committee's position is that a business has a right to sell and the transfer license is an important part of that sale. I completely agree with that. But this business is not operational. What are they selling? It was a gay bar, and now will be an Irish bar. Normal businesses sell based on several factors including their loyal clientelle, reputation, name, furnishings, plus a license. The only thing they are selling is the liquor license, for $20,000, according to Crains.

By denying this transfer license it is an opportunity to reverse some of the damage done by these new bars that have created a circus atmosphere on these formerly quiet streets.

I urge the board to stop being accessories to trafficking in liquor licenses and make a real effort to getting closer to the guidelines of the 500 foot rule.

Email ThisBlogThis!Share to TwitterShare to FacebookShare to Pinterest
Labels: ranting

Good for you for standing up and sharing your position. I completely agree - I really don't understand how the board can be so rigid with new businesses, but allow these transfers. I thought there was a rule that only a certain number of bars could exist within a certain distance from each other. Maybe that only applies to new licenses?

And what of the upcoming liquor license transfer at Superdive?

Goggla (I always want to write googly) - what you refer to is called the "500 foot rule" which says there should only be 3 bars within 500 feet of each other. This is a guideline, not an actual rule, which means it means nothing.

Re SuperDive, unfortunately my argument doesn't hold water here, and my guess is it will go through and the new owners will sell SuperKegs.

I'm worried about the space for The Raven which is also up for a transfer license hearing next month. I tried to call the owners at their new bar to ask some questions but they are on vacation.

"That is because most of the committee members are bar owners and know a golden ticket when they see one."

I know one of the CB-3 Liquor Authority Committee members (the former CB-3 president, David McWater) is a bar owner. Is it a fact there are other bar owners on the committee?

There are definitely other bar owners on the committee but I'm not sure what the overall makeup of it is.

Out of curiousity, I contacted the CB-3 chairperson. She informed me there are three bar owners on the committee (out of nine members). So, Jill, your characterization that "most of the committee members" are bar owners and thereby have a conflict of interest is incorrect. For the record, I agree with you, though, that there is no good reason to rubber stamp liquor license transfers.

Wait, The Raven had a Goth night?

You are absolutely right, I don't know it it is "most" and I will correct it immediately. It was a case of the loudest voices seeming more representative than reality. Thanks for fact checking!

For those of us who can't attend the next meeting, can we write to someone re: the transfer of The Raven's liquor license to a new bar? Also, does anyone know the people who now live in that building on the corner of 12th and A? I can't imagine they'd be happy about this. The must be paying a lot for their new apartments.

You can write via Susan Stetzer, the Manager at the Community Board. Her email address is sstetzer@cb3manhattan.org.

I don't know anybody who lives there but I often wonder what happened to the people who lost their homes after the fire.