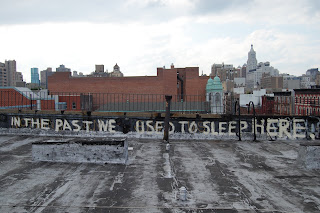 My building has a few apartments that are rented to people who would otherwise be homeless. It is managed through an organization called Community Access. The people who live in these units usually stay for about a year, and I'm not sure what happens to them after they leave. Some of them should clearly not be living on their own, and do disappear rather quickly, and others seem to be have found a good balance mixing their cocktails of medication with a morning beer. Many years ago a man fell ill in the stairwell after he got locked out of his apartment and had a major panic attack. He never came back and we think he died. Just before I moved here, a guy I was friends with in high school was living in one of those apartments. One day his social worker came knocking on doors looking for him. Nobody that I know of ever saw him again. He was a sad musician in high school, a lot of fun, the life of the party.

Then, a couple years ago, in moved Valentina, and shortly after, her boyfriend Peter. Valentina was probably in her mid-30s, though for all I know she was a very aged 25. She seemed, at first glance, pretty normal. She was cute and perky, but after talking to her for a little while you would realize that she wasn't 100% in the moment. She was a lost soul. She often seemed positive about landing a job, but only once do I recall something panning out, a brief moment when they were both employed, or at least, about to be employed.

Peter, who didn't officially live with her, was a mean and angry drunk. When sober, he was a seemingly nice guy, but that was rare. He could hold a normal conversation and be funny, witty and charming, telling tales of how his Irish family moved to Alabama when he was a kid. They were carpenters and manual laborers and, according to him, made a good life in the US. He made it sound like he could go home any time and be taken care of. He seemed to be able to occasionally get work as a cook, but never held a job very long because his bosses were always big jerks who were unfair, taking advantage of him. As anybody who came anywhere near him knew, he was an Iraq vet.

The police were called constantly about Peter. He was a famously loud screamer when fighting with Valentina, or fighting with the wind, whatever was around. He ran around the hallways, up to the roof, down to the street, to the garden and park, and back again. Taking him away in a cop car or an ambulance was a regular affair. If he was around during the day, the super would call the police if he couldn't get Peter to leave. On occasion the happy couple would drag a mattress to the roof and then proceed to have a big fight, at which point we would have to go up there and kick them out for making too much noise.

The fights they had weren't at first violent, but they started to get worse and worse. About a year ago Peter poked or punched or somehow damaged Valentina's eye, and that was the beginning of the end. She must have been kicked out of her apartment, and they disappeared from the block last summer. The rumor was they were living in Queens and I haven't seen them since.

About 2 weeks ago, Peter allegedly beat Valentina until she was in a coma, and she died shortly after. RIP Valentina, I hope you are at peace.

(I cannot find a photo of her, though I can picture one in my mind's eye, on a bright spring day. I just can't find it. If anybody has one, please send it to me so I can post it here.) 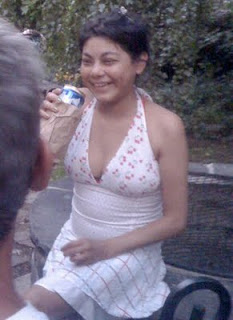 Email ThisBlogThis!Share to TwitterShare to FacebookShare to Pinterest
Labels: Obits

damn, i think i knew this girl..albeit briefly. was she petite with dark hair?

very sad if so. she was nice but definitely lost.

Yes, that fits her description.

a moving story...thanks for sharing.