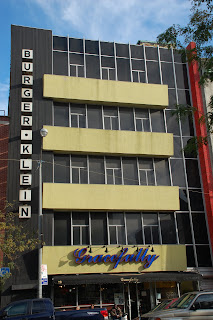 Most of the East Village bloggers and photographers of note have written and photographed the Burger Klein sign on Avenue A between 2nd & 3rd Street. But there still are no good answers about this building, or the furniture store that it used to be. If you think I have answers, you are wrong. But I did find some interesting tidbits about this plot of land.

There are no names on the door, and it always looks locked up, but somebody must be using those upper floors. But who? And if not, may I?

In 1922 the building had a CofO to use the building for a store on the first floor, and the rest for storage. Then a new COO (new building?) was issued in 1960/61 for use as a store and showroom. It is currently classified as a loft building. There are records for this address going back to 1901. It was designated an unsafe building in 1912, 1925, 1940 and 1959. I suspect that the current building was built or extensively renovated in 1960 after the last unsafe notice. Recent violations against the building appear to revolve around their elevator. But who is using the elevator if nobody occupies those upper floors?

Here are some very brief and inconclusive findings about 28-30 Avenue A.

In 1870, John Surratt, a conspirator who wanted to kidnap Lincoln and was thought to be involved with his assasination, made a speech at Concordia Hall, but few people showed up.

Approximately 1872 - 1882 it was Concordia Hall, headquarters of Tenth Assembly District Republican Association, which was embroiled in a scandal of stealing money from the party, according to a series of reports by the NY Times. There were also social functions held here as well as cigar-maker meetings and boxing matches.

My favorite clip on Concordia Hall might be this one from 1885's Annual Register.

A fierce fight occurred at Concordia Hall New York where a Socialist meeting attended by 2,000 persons was being held A quarrel broke out between the dynamite and anti dynamite factions which ended in the police having to storm the hall and after much resistance many of the rioters were arrested

Most famously, in 1911 a 48-page speech was made here by labor leader Big Bill Haywood called "The General Strike" for the benefit of the Buccafori defense. Buccafori was in jail (surrounded by "human wolves") and Haywood was making a case to strike on his behalf. I can't tell what Buccafori was in jail for, other than being a labor leader. If someone feels like reading it and telling me what it's about, that would be nice. I have no patience for such loquaciousness. You can download the speech and read it on your Kindle.

In 1910, the Progress Assembly Rooms was a popular place for dancing, during the dance craze of 1910.

1989 or 1995-2000 - A theater space called "Context" was located here. There are several references to performances here through 2000 but none before 1995 (pre-internet?). I found a phone number and got an answering machine that said, among other items of interest that "Context Studios phone number is a misprint; please make a note of it and pass it on." So I have. If you know of anybody associated with Context, you might want to tell them that Amazon owes them some money. According to Time Out, Burger Klein moved out in 1989 and Context moved in. According to their Facebook page, Context's digs that they moved to in 2000 in Brooklyn will be closing at the end of this month.

2000-present - Gracefully, the deli that I think of first when I recall the striking deli workers who were paid less than minimum wage. I would have sworn that was in the 1990's but according to Time Out, Gracefully didn't move in until 2000. From what I can gather, the building might be owned by Singh Realty, which might be connected to Gracefully. Hard to tell without making a lot of phone calls that I'm not inclined to make.

One more interesting thing: there used to be an alley that ran behind this building called Mechanic's Place or Merchant's Place. There is no sign of it on Google maps other than trees behind the building, which presumably was once a small thoroughfare.
Posted by Jill at 9:51 PM

Context was also a rehearsal and recording studio. Many people I used to know worked and/or rehearsed there. I was rehearsing there in different projects by 1992. Henry Rollins recorded one of his albums there. So did some other notable people during the "grunge" (haha) era.

I don't know remember what happened when it "ended".

The building is available for lease...

In my past research on old NYC theaters, I recall discovering that this place was an old vaudeville and movie theater in the 10s, 20s, 30s, 40s.

Love your history.
Two small clarifications: NYTimes from 12/25/59 reports a four-alarm fire on the top floor, with the roof collapsing. Racing ahead several decades, I fondly recall seeing AMM, the great British improvised-music trio here at Context in May 1994 (see http://www.spiralcage.com/blog/?tag=amm)

Great additions, thanks! I hope someone comes up with a good idea for this building before it becomes condos.

Thanks for the informative post. I'm the leasing agent for 28 Avenue A. After Context Studios left, the building was being used as a warehouse for a sportswear company. It is currently being used as warehouse for a home furnishings company, but is available for lease. If you're interested or have any great ideas, please get in touch: (347) 725-1740 or arholdings@gmail.com

I can confirm that there were band rehearsal spaces there in the 90s--visited friends there a bit. Didn't know it was called "Context"--seemed just like a random jumble. The sign was still cool back then, too.

Buy and sell new and used modern, outdoor, office, bedroom and home furniture.
Choose from a great selection of gently used furniture for every room in your home.
More here used furniture tulsa