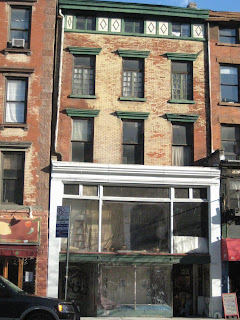 This little house on Second Avenue has attracted my attention for a long time, mostly due to its lack of restoration. If you focus just on this one building you can travel back in time. The mannequin in the window seems to move around every now and then, and once, not long ago, I saw two elderly people lackadaisically scraping molding and tiles in front.

This weekend, I stopped to snap a photo and a man stopped and told us that he's lived here for 51 years and knew the story of the house. Here is what he told us: It used to be a place that sold tuxedos and formal wear. The family had several children, but one of them, a daughter, was raped and murdered in the top floor, possibly in the 1940's (note: it was actually 1974). The killer was never found. The children (or one of them and a spouse?) still live there and refuse to renovate or change anything. The top floor is exactly the way it was when the daughter was murdered and you can still see the powder where the cops dusted for fingerprints. This man had been inside once and was witness to its originality. He said they have no intention of selling or changing or even of renting out the storefront.

The name of the family is Sopolsky, and the building was built in 1915.

Then, our historian, ran back into the store where he works, the Indian fabric store that faces the haunted house. 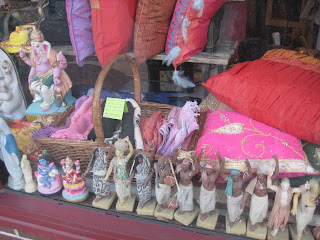 Historical notes: I found this on a flickr page with a photo of the building;

In the late 19th century, irene stenard's temporary home for women stood at this address.

here's a pic of the building in the late 19th century: digital.library.upenn.edu/women/bly/madhouse/11.gif

the address was made famous in a book written byNellie Bly
en.wikipedia.org/wiki/Nellie_Bly

Nellie Bly was an investigative reporter, and took an assignment for the new york world newspaper Blackwell Island (roosevelt island).

Under the pseudonym "nellie brown" she checked herself into the boarding house at 84 second avenue, and began feigning insanity in order to get herself locked up at Bellevue, and hopefully transported to the insane asylum at Blackwell Island. Here's an account of her story, in a book "ten days in a mad-house" digital.library.upenn.edu/women/bly/madhouse/ madhouse.html

According to nyc dob records, there was a demolition permit for this building in 1909 so the current building was built sometime after that.

Google books has one mention that this address once was the headquarters of the united cloak and suit designers mutual aid association.

NYC dof records indicate the building has been owned by the sopolsky family since 1970.

New York Times archives indicate a bunch of real estate leases, some minor tidbits associated with that address including a murder of one of the Sopolskys there in 1974.

i pulled this one up
"Metropolitan Briefs
Jan 18, 1974, New York Times
From the Police Blotter:
The nude body of a 40-year-old woman propietor of a tailor shop that rents tuxedos on the Lower East Side was found bludgeoned to death. The victim was Helen Sopolsky of 84 Second Avenue, near fifth Street, whose shop is one flight up at that address. The motive of the attack was not determined immediately...."

How Nellie Bly became an amusement park, I have no idea but I used to pass it on the way to a soccer field that was just beyond it. I don't know if it is still operating.
Posted by Jill at 8:45 PM

I remember the ground floor window display was really odd back in the late 70s.

i love that building. i met the woman who lives there once. she's very sweet. she told me, "i don't come out very much because something terrible happened inside," so she doesn't like to open the doors. still traumatized. very sad.

very cool, nice history find. i've often wondered about that building too. everything around it is changing..

Thanks Jill,
I too have been wondering about that place since it is near me and I see it all the time.
This is pretty sad, the place haunted by pain, with apparently someone there shocked and damaged for decades.

Nice job digging up all the historical facts on this. Cool, but sad to read as well.

Wow, great research, thanks Jill. What a sad story. Like so many others I have always wondered about this building. I never would have guessed anyone lived there!

So many people love this house ... if it ever does pass hands I hope the new owners lovingly restore the exterior but don't change a thing. I love the double doors and the glass display fronts.

Excellent research on a building I've always been curious about. I've also admired how she hasn't caved in to a number of offers to do something with the storefront. Though born out of tragedy, it acts as a time capsule.

Bravo Jill! I also have often wondered about this place. Thanks for the outstanding sleuthing.

I walk by here every day and it always draws my eye...I keep hoping to see a light in the window, a face, the dress form move...totally creepy, but I love it.

re: The research and sleuthing.

You're welcome everybody :D

So interesting. From wikipedia: "The Nellie Bly Amusement Park in Brooklyn, New York City, is named after her, taking as its theme Around the World in Eighty Days. The park recently reopened under new management."

What is the cross street of this building? Thanks!

The building is on 2nd Avenue and 5th St.

For many years (until maybe 6 or 8 years ago??) there was a great sign next to the entrance reading "Dress Suits To Hire" with an arrow pointing up. The sign, I think, was painted on glass in the old style of shop signage. About 10 years ago, Holly Hughes (lesbian performance artist, who was one of the infamous "NEA 4" who Jesse Helms attempted to ban from receiving National Endowment for the Arts Funding) created a piece that she performed at PS 122 called Dress Suits to Hire.

In the East Village, everything has significance.

Nothing short of brilliant.

I believe this is the same building as the one that Nellie Bly stayed in. If you compare it to the original drawing, the windows all line up. Perhaps the demolition permit was for the removal of the windows on the bottom three floors which are different from the 4th floor windows, along with the work that would have needed to be done perhaps interior walls)to add the store front?

I met the lady who lives there this morning. She was sitting outside, trying to scrub off the recent graffiti on the windows. I tried to sneak a photo, but felt guilty about it. As I stood there awkwardly, wondering if I should ask her for a picture, she called me over to inquire about my shoes. She liked the color. We chatted a little and she looked at me suspiciously when I said the building is one of my favorites. I didn't feel right asking about any of its history as it may have been upsetting to her. I wanted to stay and talk more (she told some cute stories about living there when she was a child), but I was late for work. I did get her name, though, and hope she'll be out there more as the weather gets nicer.

Oh lucky! I'll remember to wear interesting shoes next time I'm going in that direction in the hopes of attracting her attention! I have some very bright red patent leather shiny ones.

I lived at 88 2nd Ave and then 234 East 5th St for 18 years. I saw the woman who lives at 84 2nd Ave several times, and spoke with her a couple of times (about what, I don't remember). I seem to recall that she occasionally sat in front of the building on a wooden chair.

Wow Jill - just stumbled across this as I was looking for something else. I always called this building the Haunted House but never knew the history. Guess I had the right instinct. Those tuxedos on the top floor always looked spooky to me. Saw the old lady not too long ago and it seems she has lost a few marbles - she was yelling at some random passersby who were very confused by her.

FWIW, I lived at 81 2nd avenue across from this building for six years, in the late 90s. I always wondered about it. There was a sign and phone number for a catering business so i assumed that someone who owned it did catering.

I used to frequent the Mission Cafe across the street, and a heavyset man with an odd demeanor, age totally unplaceable, maybe in his 50s? used to come in to the cafe and sit and have a coffee for a very long time almost every day. He had a big brushy moustache and looked unbathed but not homeless. I thought I saw him go in and out from the building next door so I wonder if he lived there and if he is one of the family members.

The Betty everyone speaks about, is Betty Sopolsky. She seems to stop and talk to people when I read other comments on other blogs. When you google the address her full name appears. Another puzzle piece.